Three weeks ago, we went to the ‘International Festival of Audiovisual Programs (FIPA). It took place in Biarritz in January.

This international event is based on the diffusion of films or short films in various foreign languages like English or Spanish, or in French, by well-known or unknown filmmakers. This festival lasted six days and it permitted professionals to encounter a large audience.

A committee awards for best productions each year.

This festival sounded to me very interesting. We were allowed to discover the work of producers, moviemakers, actors,… That was very beneficial because we learned a lot. In this particular case, I understood better about where their inspiration came from.

The FIPA was a very good social and educational experience. I invite all the students to take part in this festival too.

Two weeks ago, we went to the FIPA (Festival International de Programmes Audiovisuels) to see two movies at the Royal Cinema in Biarritz. Today, we are going to talk about the second one: Carmine Street Guitars produced by Ron Mann.

This movie is about Rick Kelly and his apprentice Cindy Hulej whom we had the chance to talk to at the end of the projection.

Rick owns a guitar shop in Greenwich Village’s heart, in New York. They both build guitars from wood they pick up in New York’s dumpsters, old bars, hotels, churches… They are not only unique because of their sound but also because of their appearance.

They sold their handmade guitars to world-known artists such as Lou Reed, Patti Smith or Bob Dylan.

We found this movie both surprising and interesting because of its story and the two main characters, Rick and Cindy, who moved us. At the end of the projection, we were lucky enough to meet Cindy in person and ask her a few questions. It was unexpected because it’s not the kind of movie we are used to watch.

It was also interesting from the environmental point of view since, in order to make the guitars, they use recycled wood instead of cutting new trees. Moreover, using old wood from New York gives the guitars sentimental value.

On Friday 25th January, we went to the FIPA. We saw two documentaries. One of them was about a guitar shop named Carmine Street Guitars, in New York City. The main characters of the documentary were the owner of the shop himself, Rick Kelly, and his employee Cindy Hulej.

Both of them are instrument makers. They make them, they personalize them and they sell them! One of the particularities of their guitars is that they are made with old wood they find in old buildings all around.

Moreover, we saw different artists playing guitar and speaking about their love for music and guitars.

Discovering that process of production was as very interesting as hearing the story of all these people in this documentary. On the top of that we discovered a new district of the New York I had never heard about before. 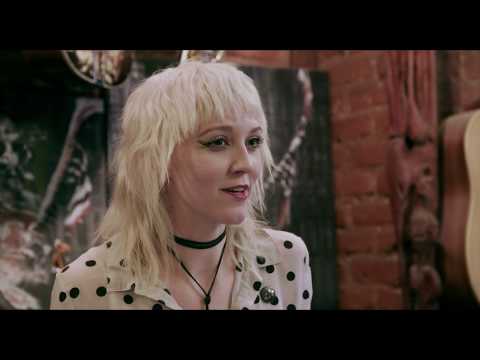 On Friday 25th January, the European section went to the ‘Festival International de Programmes Audiovisuels’ (FIPA) to watch some documentaries. The most interesting one was called ‘Carmine Street Guitars’and was about a guitar shop which has been located in NYC since the 1970’s.

The owners, Rick Kelly and his mother, have been running the business for all those years. Rick builds and repairs guitars for his customers, while his mother is the secretary. There is also Rick’s apprentice, Cindy, who started working in the shop 7 years ago. We learnt that her only goal was to work for Rick. She actually discovered Carmine Street when she was little, and has always wanted to be a part of it. The documentary’s structure is based on a normal working week. We got to follow the characters each day while they were working in the shop. Every day brings a new customer in the store, who was informally interviewed and talked about their story. For instance, we saw a member of The Roots and Bob Dylan’s guitarist.

After the documentary we also had the chance to attend a Question and Answer session with Cindy, who went to an art school and now designs guitars on her own. Interestingly all the guitars are made using old wood from former buildings of New York that have been torn down. During the private interview with Cindy, she explained how the shooting went. As well as giving us more in depth information about her work and about guitars overall. We would advise this documentary to people who have interests in guitars and would like to learn more about their making.

I’ve been so impressed and delighted by the smoothness of the dancers’ movements. And I will never forget the feeling of pure joy seeing them practice! Nah… just kidding.

The documentary was supposed to be in English, right? It sounded more like Franglish to me…

« You place yourself on the F and then, you swirl on the C to return on the A. But beware ! Don’t go on D otherwise it will ruin the thing ». RIVETING !!!

In a nutshell, this short film was empty and without interest. Just my opinion !